I think it’s safe to say that every little girl has other girls she “crushes” on.  Girls and women they admire and strive to be like.  I’ve always had girls crushes.  I still have girl crushes.  I think the celebrated ladies in my life have been pretty good role models for me while growing up.  Although I was raised very well by wonderful parents, I also think the morals these gals and their characters maintained have helped me develop into the person I am.  I’m not giving them 100% credit because that would be ridiculous, but I I think it’s important for young girls to have good role models (the Abster likes Selena Gomez and Debby Ryan) to look up to – girls with manners and etiquette and cute and quirky; yet make mistakes and learn life lessons.  Below is my list of girl crushes thru my life:

Of course, my NUMBER 1 Girl Crush is and always will be reserved for my girl Drew Barrymore.  I’ve loved her since E.T.

Growing up in the 80’s (and being limited to tv AND two channels) I fell in love with Alyssa Milano from the first second I watched “Who’s the Boss?” .  She was so cool…beginning as a tomboy and growing into a mature young woman with cute clothes and the best hair.  I grew up with Alyssa.  Some of the time I wanted to be her.  I loved her and I am still a fan.

Candace Cameron was my age when she played DJ Tanner on Full House.  She was also Kirk Cameron’s sister and that made her even cooler.

My foray into my obsession with supermodels (and eventual spiral into eating disorders /weight obsession {https://welcometosandyland.wordpress.com/2012/01/16/my-secret-obsession/} began with Cindy Crawford.  My aunt Donna introduced me to Cindy’s career when I was 13 or 14 and I’ve followed it ever since.  In spite of her film “Fair Game”…Lame Cindy….LAME.

Kristy Swanson was the original “Buffy the Vampire Slayer” and she was cooler than shit!  My BFF Stephanie and I loved her.  But, now that I think of it, I think we loved the idea of Buffy and her kick-ass vampire-slaying more than Kristy herself.  I feel a little bad for Ms. Swanson because she’s a pretty good actress and she’s gorgeous and I think her career could have been a lot bigger.  She deserves more that those shitty made-for-tv movies and Skating with the Stars or whatever the hell it was called.

Alicia Silverstone was introduced to the world early 90’s via Aerosmith videos and “The Crush” but we really didn’t fall in love with her until “Clueless” in 1995.  Since then she’s stayed sugary sweet, had a bunch of cutsie movies (and a great show – Hello, “Miss Match”) and is the biggest vegan activist (and author) I know of.  Alicia is saving the (animal) world.

Miss Match should have been kept on the air. Great show!

Claire Danes gave a wonderful portrayal as the angst-ridden coming-of-age Angela.  And then as Juliet to Leonardo’s Romeo (which solidified my love for Claire even more.)  She has come a long way but still seems very grounded.  Gnarly.

“Don’t you just love the way he leans??”
~Angela Chase

I first saw a modelling photo of Milla Jovovich when she was 13…which means I would’ve been 12.  I thought she was absolutely striking.  What a beautiful girl.  Then I saw her in “Kuffs” (Christian Slater!) in ’92 and “Dazed & Confused” (Cole Hauser!!!) in ’93 but my serious girl-crushing on her didn’t start until the “Resident Evil’ movies.  This girl is kick-ass!

Lindsay Price.  She played An Li on All My Children and was semi-annoying.  But once she got to Beverly Hills (“90210”) I started to girl crush on her.  But the serious girl crushing came when she moved to “Eastwick” and played journalist Joanna Frankel (https://welcometosandyland.wordpress.com/2012/12/07/reviving-eastwick/). 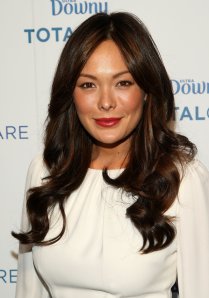 Zooey Deschanel is quirk-a-licious.  She’s funny and she’s beautiful and she can sing and she’s so damn funny and she has the best style.  I love this girl.  Loved her in “Almost Famous.”  Loved her even more in “Elf.”  Totally girl-crushing on her in “The New Girl” (one of my new favorite shows – after “Grimm” of course).  Oh, and she has the cutest blog (http://hellogiggles.com/) with live bunny cams.  HOW ADORABLE IS THAT??  (Oh, and she comes in a close second to Shannen Doherty for best bangs.)

My girl crush on Zooey and her style and her humor is the inspiration for this post.

The New Girl is the IT girl!

So there you have it…my timeline of girl crushes throughout my life.

*LAME NOTE/AKA SIX DEGREES: in 1992 Drew Barrymore starred in the short-lived 2000 Malibu Road produced by Aaron Spelling.  Aaron Spelling also produced Beverly Hills, 90210 starring Jennie Garth, Shannen Doherty and Lindsay Price.  Lindsay Price starred in Eastwick.  Luke Perry starred with Kristy Swanson in Buffy the Vampire Slayer.  Shannen Doherty starred in Charmed with Alyssa Milano (also produced by Aaron Spelling).  Alyssa Milano starred with Scott Bloom in Who’s the Boss? and with Scott’s brother Brian Bloom in Dance ’til Dawn and Crash Course (and they also dated). Brian Bloom also starred in 2000 Malibu Road (with Drew Barrymore) and Desperate for Love with Christian Slater (along with Veronica Cartwright who starred with Lindsay Price in Eastwick).  Christian Slater also starred Heathers with Shannend Doherty and in Kuffs with Milla Jovovich .  Milla starred in Dazed & Confused with Cole Hauser who starred in White Swan with Christian Slater.  Alicia Silverstone and Alyssa Milano were both offered parts on 90210 but turned them down.  Alyssa, however, moved to Melrose Place which is produced by Aaron Spelling.

(This goes on and on and on….I’m just getting warmed up.  But, you get the idea.  I’m a beacon for useless information…especially when it comes to celebrities.)