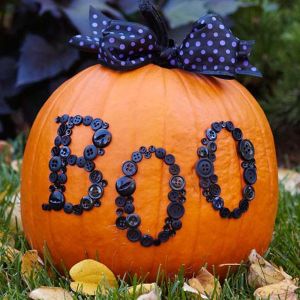 I’ve had my costume planned since last year but never got around to doing anything about it until two nights ago.  So, in a mad dash I rummaged through my closet trying to find out what I had and what I needed.   Then I mad-dashed on my lunch break yesterday to get the remaining items and last night after getting home my my classes at almost 10’o’clock I finished up the remaining few details…sewing here and there.

I waited allllll day to put on my costume. 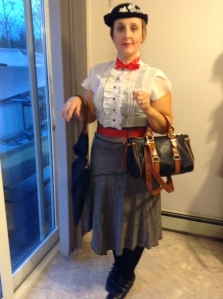 I had to go to the grocery store in that outfit.  I got plenty of compliments and a couple of odd looks.  (It’s Halloween people!  Lighten up!)  I have two costume parties to go to tomorrow night.  One of them I’ll definitely be rocking this costume you….the other party is a themed party but, albeit keeping with the them, I’m gonna throw some originality in there too.

And now I’m home and my plan for the night is to sit back with a glass of wine (check) and watch Scream 4 and maybe Monster Squad.

I had waited and waited for so long for Scream 4 to be released but I suck and never got to see it in theater.  Then when I did finally watch it it was a shitty version and I missed half of what was going on.  So here’s hoping tonight will be better.

Monster Squad is freakin’ awesome movie.  I talked a little bit about it a while ago (you can read it here).  And even though it’s technically aimed at kids, it’s still scares me. I recommend it. For adults.  Don’t let your kids watch this crap…you’ll be spoon-feeding them cough syrup just to get them to sleep.

Bill Murray is bombdiggity.  And a girl I know made these freakin’ pumpkin carvings.

If I were Bill Murray I would tell that girl:

This video made my day.  I think I’m in love with Teddy.

(I also do not condone a porcupine as a house pet but this dude seems to be loved.)

If  you haven’t seen Jeepers Creepers then do yourself a favor and watch it.

It’s not super scary but it is creepy as hell.

From the opening sequence when we’re first introduced to that menacing jalopy truck that torments our main peeps, reminiscent of Steven Spielberg’s Duel…we’re just left in dangling suspense.

So the story: Trish and Darry, sister and brother heading home for Spring Break on the back roads of inbreederville, are tormented briefly while driving.  Shortly after they drive past an old church, see the old truck and the “Creeper” tossing a body down a hole.  The Creepers sees them seeing him and soon enough he runs them off the road.  That’s when Dumb and Dumber make the WRONG decision to go back and check down the hole.***

***NOTE:  If you ever find yourself in a horror movie scenario and there is an option of going back to check to see what’s been thrown down a hole/check out an abandoned house/visit a graveyard (especially after dark)/get in a car with a stranger/etc.  DO NOT DO IT!!!!  It’s that simple.  DON’T GO!  Stay the eff put or get the hell out of there but DO NOT make the wrong decision.  ANYTHING you have to be talked into is the wrong decision. <<– And THAT right there is your advice for the day!  Heed it!

This movie isn’t the best one out there.  In fact, while re-watching it I was left bored at times. But the little subtleties thrown in are great (if you can catch them), and when we’re hit with the Creeper……Yikes. 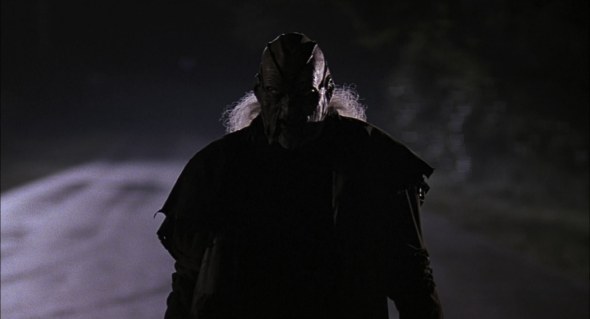 And even more Yikes when we see the old bugger full-blown pissed off! 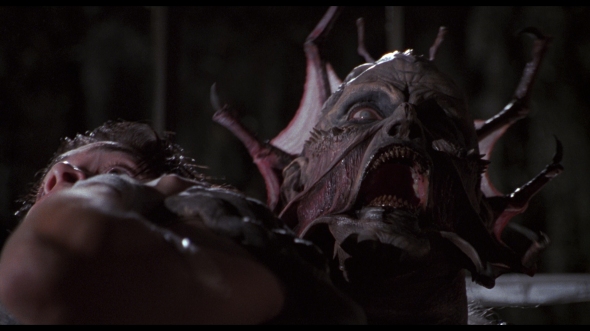 It’s a fun movie and the ending is kinda cool, kinda gross.

Watch it and enjoy it.

Okay, so I’m not gonna lie.  When I originally watched this movie years ago it was solely for Desmond Harrington.

Those eyes….
Those cheekbones…..

Remember Desmond Harrington?  He is fine. 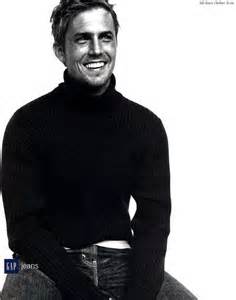 That smile…
Those teeth!!

I was fresh from seeing him in Wrong Turn and had to rewind life to go back and watch Ghost Ship (which was released the year before).  I really didn’t like it but I watched it more than once JUST because Desmond Harrington is so hot.

And, of course, the more I watched it the more I liked it.  I picked out some little details I hadn’t noticed in my original viewing and I’ve sort of grown to like it.  Which is why I put this little gem on my list to watch this Halloween countdown.

This movie has plenty of creepiness. 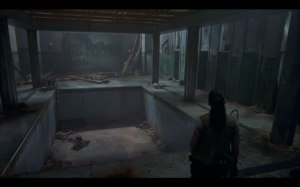 And water.  Tons of water.  And y’all know how I feel about water…and boats…and ghosts.  Yikes.

The only thing that keeps me watching every time is Desmond.

For me, watching Hocus Pocus at Halloween is like watching Elf and One Magic Christmas at Christmas time – it’s a must.

This morning Abby and I settled in to our butt grooves on the couch and watched Hocus Pocus.  I did a post on this movie two years ago (read itHERE) so I’m not going to bore you with the same details.  But go watch Hocus Pocus because it’s funny 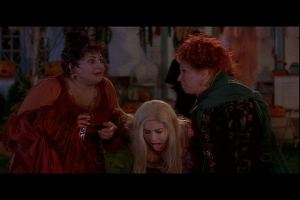 It has some funky witches

The movie is a classic!

I’ve Been Waiting for You

The 10 Days of Halloween continues, and although I sorta cheated the last two days and didn’t actually watch any horror movies I did watch Stalker and The Walking Dead…so, that sorta countas.

But i made up for it this afternoon by watching I’ve Been Waiting for You.

I remember being so excited to watch this movie.  It rode the coattails of I Know What You Did Last Summer (it was written by the same author) and it was super creepy – for the time…and for airing on tv.

It clearly wasn’t as good as I remember but it was still okay.  And I’m sure it really would have wrinkled my feathers if I’d watched it at night, in the dark.  Y’know,,,the way scary movies are intended.

Anyway, if you have the chance check out this little goodie.  The full movie is available on YouTube.

Normally I like to start my celebration of Halloween early but since I was busy with studying up until this past weekend, I had to put my readying-for-Halloween on hold.   But fear not! (<<- see what I did there?)  Last night I watched my first “scary” movie of the season and I’m kicking off the 10 Days of Horror Movies

First, let’s just get one thing straight!  My version of horror movies and your version of horror movies are more than likely two very different things.  If you check out my posts from Halloweens gone by (check out THIS LINK), you will note that I have watched my share of horror flicks….and some of them have ruined my life (I’m looking at YOU Stephen King’s IT!!).  But these days I spend half the time sleeping alone and I don’t need those thoughts running through my head when I close my eyes.

So, last night I settled in with “Don’t Be Afraid of the Dark” starring Katie Holmes, Bailee Madison, and Guy Pearce.
I don’t think I’d ever heard of this movie before but I happened to see it advertised last weekend so I decided last night was the night.

……Annnnnndddd………….it sucked.  No really, it wasn’t very good.  The best part of this file was the acting was by little Bailee Madison (what’s up with you, Katie Holmes??).  The story-line wasn’t horrendous but there were some plot holes left wide open and unexplained and the effects were…..yikes.  I expected more from Guillermo del Toro and from Guy Pearce.

I’ll take the movie for what it was: a good try at a scare….maybe aimed at a younger audience.  There were a few (very few) spots that intrigued me but for the most part it was laughable.  To be perfectly honest, I was a little embarrassed for this movie.  One and a half thumbs down.

Stay tuned to see what’s coming up next.

That’s right, it’s Thanksgiving weekend in Canada (Thanksgiving is on Monday) when we give thanks for the Harvest and other blessings of the year.

It’s a beautiful, sunny, Fall day but, unlike so many of my friends who participated in the Harvest Marathon this morning, I’ve been studying my butt off all weekend.  It sucks.

But, I do have dinner plans tonight which involve my adorable little nephews, so I will welcome that study break.

And, although I’ve been studying half the day already, I did take some time out to make some delicious pumpkin pie tarts 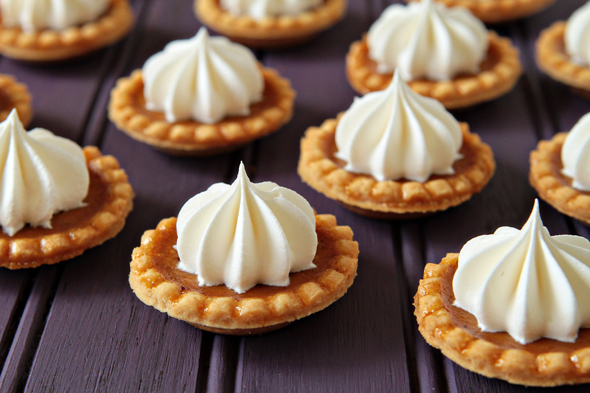 Can you say YUM?

Actually, what I made are Paradise Pumpkin Pie tarts.  I usually make a big pie, but, y’know, studying.

These little tastes of pumpkiny goodness step away from the traditional pies and offer a little kick.  I don’t normally share the recipe but I’ll share the one I altered today so that I could spend more time on the books (and, apparently, on this blog):

1 can of pumpkin pie filling

Tart shells or pie crusts (I don’t make this crap from scratch – but if you’re up for the challenge, give’er!)

Throw the pie filling, cream cheese, vanilla, and spice in a bowl and blend it up (I used an electric beater).  Pour into tart shells or pie crusts (top with tiny dashes of the spice if desired) and bake at 350 for 20-30 minutes.  Once out of the oven and cool top with whip if desired.

Aside from it being Thanksgiving, it’s also The Walking Dead premier night. I will definitely be study-breaking for that.

In addition, I am also really, REALLY thankful for Pumpkin Pie Pop Tarts.  I have no idea where you can buy these but I would be happy (and thankful) to accept donations.

In honor of the new show Stalker on CBS

and me getting thru the first episode (which I watched in the morning on the day of my birthday, when I knew I would be surrounded by many, many people) I thought I would post a redux of Have You Ever Had a Stalker?

There will be more to come on this topic soon.  So, stay tuned.  And in the meantime go check out StunBunny’s blog.