By now you probably have figured out that I love my friends, that I was a huge fan of the show Eastwick and that my first Girlcrush was on Alyssa Milano.

So, it should come as no surprise that I am a big fan of the new show Mistresses on ABC. It debuted last week and after two episodes I am hooked (okay, I was hooked after the first episode).

Now, I’m certainly not condoning the topic of the show (cheating) but so far, it’s making for some good TV.
It’s one of those shows (like Eastwick) where you want to get together with a few girlfriends, break out a bottle of wine and just watch the shizz hit the fan.

It’s got all the elements you need:
A great cast with some familiar faces (Alyssa Milano, Sun from Lost, Rochelle Aytes, Jes Macallan, Shannyn Sossamon) with some groovy cameos (Bo Duke, Warrick Brown from CSI, Brenda from Adventures in Babysitting), some sex, some drama, nice clothes, a little humor…It even has this guy from Eastwick

And for comparison’s sake, let’s have a look at the posters for the two shows: 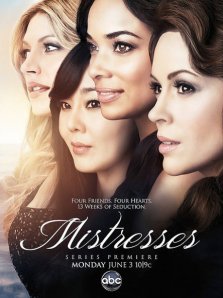 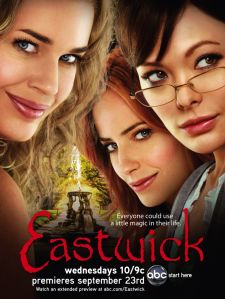 ABC PLEASE put this on DVD!

Okay, not identical but I’m sure you can see the similarities….right?

Anyway, after two episodes Mistresses is proving to be a really good show so grab your girlies, grab some wine, put your feet up and enjoy. (And do yourself a favor and go watch Eastwick online because that show totally rocked.)

After talking about it during Halloween, I decided recently that I wanted to watch the series Eastwick again.   Sadly, Eastwick was cancelled in its first season so there were only 13 episodes to watch; which I’ve done over the last few weeks.

I keep talking about this show because it was so good!  I’ll never understand why shows like this aren’t given a chance.  It had a crazy following, was nominated for a People’s Choice Award, headlined an incredible cast (not to mention the great guest stars: Cybill Shepherd, Rosanna Arquette, Jerry O’Connell, Joanna Kerns), and had a great story-line.  It was a great show: Fun, exciting, sexy, silly.  And completely perfect for watching with your girlfriends and drinking wine.

Eastwick starred Rebecca Romijn (Roxy), my girl Lindsay Price (Joanna), Jamie Ray Newman (Kat) (who’s also guested on Grimm) as three women who come together accidentally and create a beautiful friendship.  And, unknown to them, they are witches, each with a specific and special power.

Also starring are several other great actors: Veronica Cartwright as Bunn – who knows Darryl from another time but refuses to give up what she knows;  The gorgeous Sara Rue who plays Joanna’s sidekick and BFF, Penny.  These two girls have such a great friendship, one that’s true-t0-life and reminds me oh-so-much of my friendship with my BFF, Steph (shout out!); Darren Criss, who now plays the magnifique Blaine on Glee.  And these are just a few of the people who make up a great cast for a great show.  “Great.” Should I be saying “Great”?  Because I feel like I should be using a better, more exciting word to describe Eastwick.

What a great looking cast!! We should be friends.

I wish that Eastwick hadn’t been cancelled.  I wish that I had the opportunity, still, to sit down with a glass of wine and watch it and laugh and get caught up in the drama and silliness and the magic of this show.  I loved it.

Thank goodness for the ability to watch tv online because Eastwick hasn’t been released on DVD yet.  But if it ever does, I will surely add it to my collection.

Sticking with my seemingly Halloween-themed posts this week, I want to let you on a little secret from my teenage years: My obsession with wanting to be a witch.

It started in high school and with the release of The Craft. 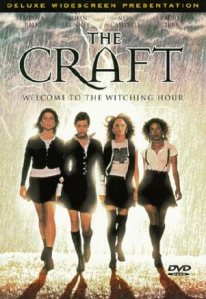 My BFF Steph and I watched it a bunch of times and kind of became fascinated with it.  Not so much with the movie, but with witchcraft itself.  That was back when internet usage was limited (does anyone remember dial up?) so our research was done with books 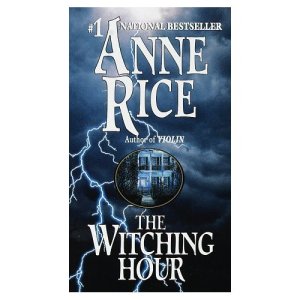 This book took me forever to read.

…and movies.  We actually came across an old spellbook from the 60’s or 70’s and were determined to try out some spells, although we were deeply warned (yes, warned) not to toy with something we weren’t familiar with and that could be dangerous.  And to 17 year old girls it was so exciting.  It was dangerous and forbidden and unknown (or so it seemed back then) and we were all over it like a fat kid on chocolate (I can say that because I was a fat kid.  AND I love chocolate.).

We would sit in our protective circle, light the wicks of our candles, say a prayer of protection, and then try to chant or cast a spell.  It’s so ridiculous now thinking back to it but in the day, we were having fun.

I still love The Craft, and to tell the truth, I am still interested in the ‘art’ of witchcraft.  It is quite fascinating.  Maybe because it’s new and forbidden territory.

I would only ever practice for good…like Glenda.

Again, while in high school* (*I should mention that many of the books on our English curriculum mention witches or witchcraft:  MacBeth, The Crucible, Saint Joan – these books were mandatory reads for Grade 12 English), I wrote a huge – HUGE – sociology paper on The History of “Witchcraft of the World” (or something to that effect).  I got an A and keep that paper in my portfolio {to reflect my incredible writing efforts – hehe}.

There is something about the element of the unknown that is exciting.  That gives you a chill and a jolt and sends shivers down your spine.

A) I wanna go here. B) The Salem witches would be the SHIT now!!

A few years ago I fell in love with the show Eastwick because it was a show about witches for grown ups – and I love Lindsay Price.

…And last year’s Secret Circle was fun to watch but it was aimed for a high school-aged audience.

Maybe my former fascination is why I like Grimm so much (have I mentioned in my blogs at all that I love Grimm? Hmmm??).  It’s fun to watch the scary fairy tales unfold.  To watch a world of make believe unravel into reality.  To live, for one hour, in a world where magic does exist.  It’s romantic…in that gothic kind of way.

I think we have Anne Rice to thank for that…..And Buffy!

**Okay, I’m posting the following pic because I love you all and really don’t give a crap anymore.