In the Tall Grass (Don’t Watch It!)

I managed to watch another “horror” movie the other night with some friends.  And let me just say that the only thing horrific about this movie is the time I wasted watching it that I will never get back.  Oy! 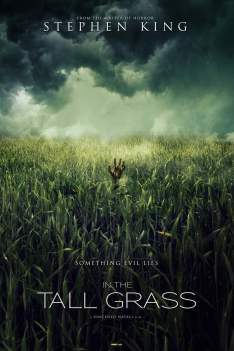 The only thing evil is the trickery they’ve used to get us to watch it.

The movie is called In the Tall Grass (2019) and is co-written by Stephen King.  And of course, it is a little messed up, as is most things written by Stephen King.  But this movie is just fawkkkked!  Honestly.  I can’t even tell you how craptastic it is.  But I also don’t want you to watch it because it’s just that bad.
What makes it worse on worse is that it co-stars Patrick Wilson.  And I really hate that guy!  It’s like when Fisher Stevens was on Friends and played Roger the therapist and everyone said “I hate that guy!”….that’s how I feel about Patrick Wilson….only more!\ 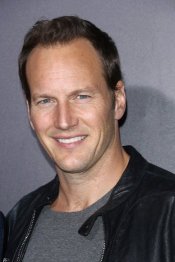 I HATE THAT GUY!

I’m just gonna go ahead and spoil this idiotic piece of garbage for you.  Brother and sister hear a kid in the grass calling for help.  They go looking for him.  They lose each other.  They can’t find the kid.  The grass is never ending.  There’s a giant rock with some old lingo carved into it not sure if it’s Native or Alien or something else.  They meet Patrick Wilson.  He’s a creepy devil type dude.  He has touched the rock and the rock has powers.  The sister’s boyfriend comes looking for her.  She is pregnant.  They see themselves dead over and over.  It is very Groundhog Day-esque.  Patrick Wilson wants to sacrifice the sister’s baby (she’s pregnant) and the grass people want him to.  It’s SOOOO messed up.
That’s it.  To be honest, I can’t even tell you any more because it just makes me that angry.  Don’t watch it.  It’s garbage!
Cheers.

Well, after posting my Halloween movie watching fail yesterday, the Man and I decided to watch The Boy (2016).

I had seen the trailer in 2016 and was like…..yeah, NO.   Nope.  No way.  FAWK THAT!!
But, a while ago one of my friends had seen the movie and passed on the gist of the ending – so I was a little more prepared.  It was like when someone spoiled Fight Club for me…I reacted to the movie a lot better knowing what kind of insanity was happening.
I don’t always (let’s be honest – ever) like being scared – especially when it comes to dolls, ghost stories, kids, possession….yeah, mostly the basics.  So thankfully, my friend spoiled this movie and I could chill out a bit.  A BIT.
This movie…W.T.F.??  The premise of the story is that Greta (aka Maggie from The Walking Dead) moves from the US to England to become a nanny for a couple for their boy, Brahams.  When Greta is introduced to the boy by his parents (who are old – grandparent age), she is shocked to find that Brahams is actually a doll.  A creepy-ass mofo, but still, a doll. 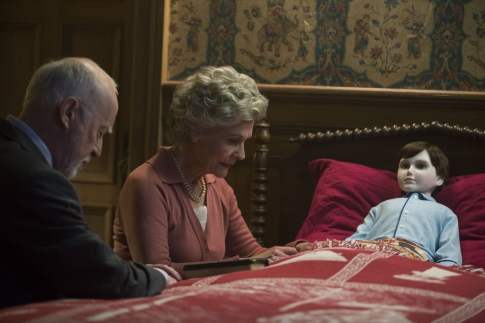 The parents have all kinds of rules and schedules for her to follow and they treat Brahams just like a real boy, Pinocchio.  When the parents hit the road for what turns out to be an extended vacation, Greta is left in this creepy old death house mansion with the damn doll, er boy, er doll? 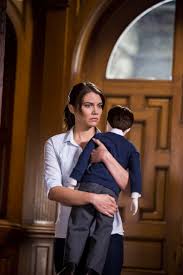 All kinds of shenanigans incur, and at one point during the movie I said to the Man “At this point, she deserves whatever happens to her because she has had ample opportunity to leave that damn creep-ass shit”.  Seriously.  A.  There is no way I would have stayed in that gigantor house alone with a damn doll that gets up and moves around freely on its own.  Nor would I have stayed past any of the other encounters.  In fact, as soon as I realized the boy was a damn doll, I would have said “See ya!” and bolted.

There were plenty of yelps and jumps from us while watching.  And it certainly kept me on the edge of my seat.  And there are some twists and turns just to make it that much more creeptastic.  So I was pleased that my horror movie watching finally got started.
~Cheers. 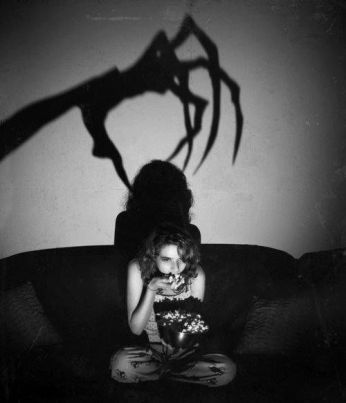 I have been trying desperately to get into the Halloween movie-watching mood.  But this year I am failing.  I, as always, have a list of scary or creepy movies I want to watch before October 31, but I just haven’t been in the mood.  I haven’t even watched Hocus Pocus yet.  *gasp*  I KNOW!
I have attempted several movies – but, as noted above, have failed.

I have tried to watch the following movies the past week or so:

2.The Haunting (1963).  I have seen this movie before, years ago.  But this time (and maybe then too), I found it very boring.  And annoying.  I thought Lily Taylor was annoying in the remake, but Julie Harris needs a little throat punching too.

3. White Zombie (1932).  This had promise.  It still might.  But I was so bored after a good half hour that I couldn’t deal with it anymore.  Spoiler alert…the zombies are just people.  There’s no blood, no zombie make-up or ghoulishness tho.  Just people.  And in black and white (1932), it’s hard to distinguish from the living and the dead.

4. Night of the Living Dead (1968).  I saw this movie a long, LONG time ago too. And it’s not too bad.  The lead female, Barbra, needs some throat punching.  I fell asleep watching it, so I will have to finish.  Again, the zombies could use a little more distinguishing characteristics…blood, more goth looking faces, something.

I will have to try harder…because, Halloween is in a week and I’m not quite there yet.

In keeping with the October/Halloween theme….here’s a little anecdote for the day.

I can be a bit of an ass.  At work, I have had an ongoing ass-feud (that sounds weird) with one of my coworkers.  There are many stories I can tell, but I’ll save those for another day.  Yesterday, however, this co-worker (let’s call him Bob) used our firm calendar to plug in his appointment for blood donation.  He scheduled it so it says “Bob blood”.  Since it is the firm calendar, it is public to everyone in the office to see, amend, delete, etc.

So, I thought it needed a little spiffing up.  I changed his appointment to say “Bob blood for sacrificial ritual”.

We have all had a good chuckle.  Including Bob.  But he said it’s not the worst thing…that another coworker would steal his paper calendar and write in things like “bikini wax”.  😀

This time of year, when it’s a little cooler out, and the dark comes a little earlier, I find that I’m not as eager to stay out and as I am when the sun is shining warmly.  Once night falls during fall, I want to light candles and cozy up with a blanket and start my Halloweeny movie watching.

Something about the dark and the way the air feels different in the fall….

I’ve tried a couple of movies already but haven’t quite gotten in the mood yet (and turned them off).  But, the time is a-comin’ and I’m feeling a little witchy….so, please send me your bewitching suggestions for my Halloween movie countdown.

I like all things witchy and Halloweeny…I’m never tired of Practical Magic or Scream.  And of course, who could tire of Hocus Pocus??  But I’m always looking for new movies to add to my list.

When I was about 20 I dated a guy who was a complete ass.  He was a full-on mama’s boy and a spoiled brat.  Turns out that I actually couldn’t stand him (we didn’t date very long).  He would get upset over the smallest things.  One time he thought it would be a good idea to have a half-assed drag race.  His grandfather had bought him a new sports car and I was driving a 1984 Chevy Blazer that would stall at right turns.  But I floored that beast and smoked him.  He was so pissed off at me that he wouldn’t speak to me for a few days.  #mamasboy

One night, while waiting for him to arrive, I sat around watching Jeopardy.  A few hours later, after he’d shown up and decided he didn’t want to go out, we spent the night in watching TV.

The same episode of Jeopardy came on another channel and I suggested we watch it.  Of course, I’m an ass and never mentioned that I’d already watched it earlier.  So, each and every time Alex Trebek would read the question (or, the answer), I would chime in early with the correct response.  The guy was flabbergasted.  He could not believe how smart I was.  “How did you know the answer to that?”, “Wow!  You’re really good at this!”,  “You should apply to be on the show!! You would win!”

Our dating relationship did not last that long and I’ve never told him the difference.  My ’84 Blazer and my superintelligence were apparently just too much for him. :p